... helping visitors attach
positive meanings and values
to their onsite experiences of places
with significant natural and/or
cultural heritage

Heritage interpretation helps provide meaningful and valued experiences for visitors. Project work at the East Ballina Aboriginal Place included the creation of custom step aside nodes along the Ballina Coastal Recreation Pathway. Here visitors are invited to appreciate the heritage interpretation significance of the precinct to Aboriginal people.

Heritage interpretation helps visitors appreciate the special cultural and/or natural values of the places they explore. This focus on the significant qualities of a place means that a conservation heritage assessment is the primary step in any interpretation process.

This approach focusses attention on the place itself in the first instance. It ensures that a sense of place stands as the foundation of the heritage interpretation narrative. This avoids it being relegated to the backdrop against which various storylines are played out. A sense of place provides a foundation that can then support a diverse array of storylines and narratives that may have been draped across the landscape over time.

One example of how this place-centric approach to heritage interpretation can play out in practice comes in the case of the work we undertook for the Stringybark Creek Historic Area in Victoria in 2017/18.

Stringybark Creek is the location where three policemen were killed on 26 October 1878 by a group of four men who thereafter became known as the Kelly Gang. This made the site of central relevance to the Ned Kelly story narrative. It also was a place of great significance to the present day families of the policemen whose lives were destroyed there.

The original heritage interpretation work at Stringybark Creek was installed as part of the creation of a Ned Kelly Cultural Trail. This had resulted in the site being positioned as the backdrop against which the Kelly hero narrative was played out. Similarly the three policemen who died there (and the one survivor whose life was forever changed by the event) were relegated to the status of collateral damage in the Kelly saga. The need to redress this imbalance was the driving force behind the new heritage interpretation work we were commissioned to undertake.

Our approach to this work was not to simply correct one polarised hero narrative by replacing it with another. Rather it involved a focus first and foremost on the place itself as the backdrop against which an array of storylines overlapped and connected in a particularly fateful manner in October 1878.

The entry signage visitors encounter as they enter the Stringybark Creek heritage interpretation precinct focusses on the location itself in the first instance. It recognises that the events that occurred there and the characters involved can best be understood based on a clear sense of place and an understanding of how events conspired to arrange these players at this place at a given point in time. Zoom in on the image below to view the panel content. 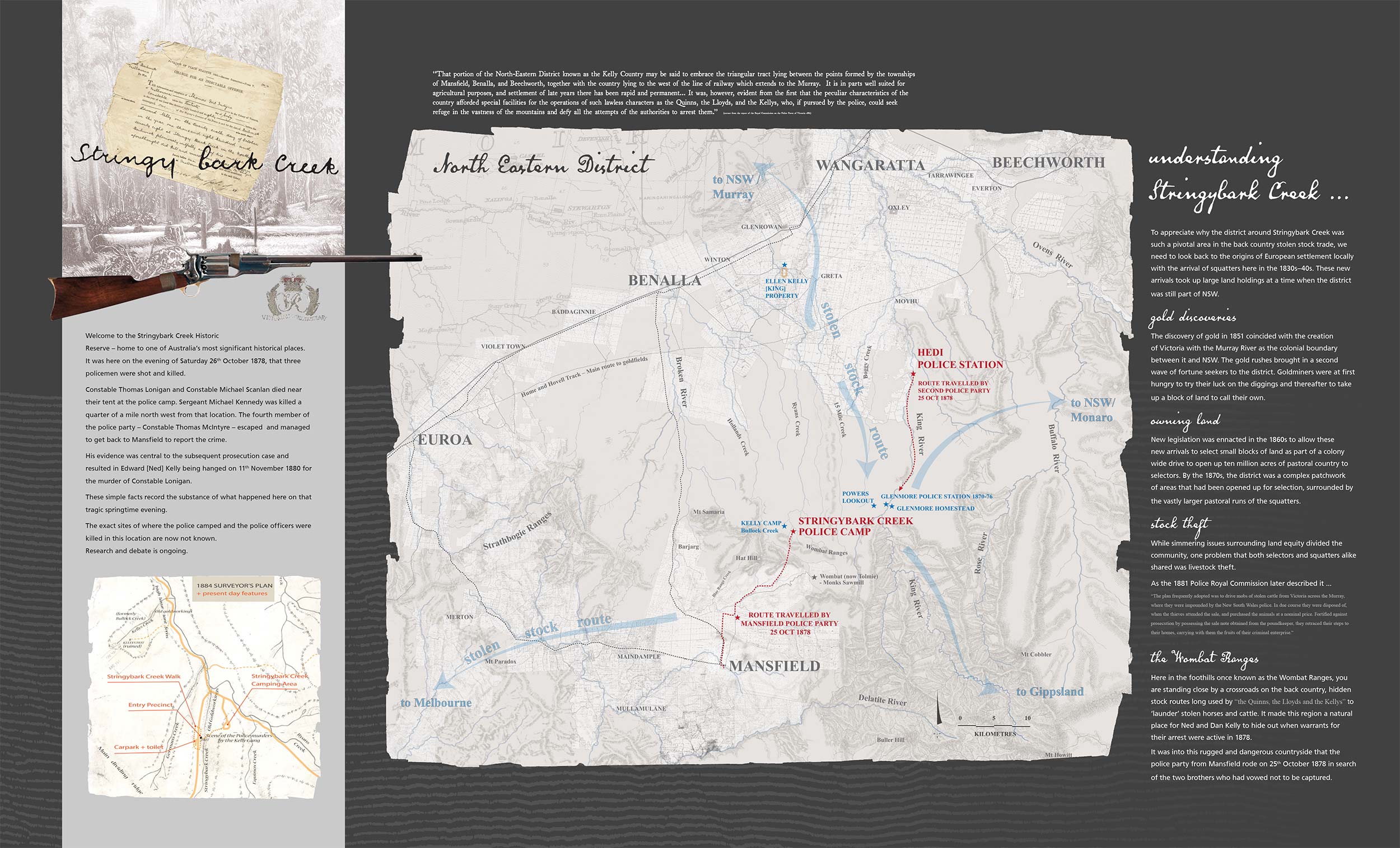